The first speedcubing World Championships were held in 1982 in Budapest. Minh Thai (USA) achieved the top time of 22.95. Today many speedcubing methods have been developed resulting in a world record of 4.22 seconds by Felix Zemdegs. As a beginner, if you want to improve your time you must practice with a high-quality Rubik’s Cube that has good corner cutting abilities,  excellent tensioning, and well-lubricated. Practice finger tricks and time yourself to keep track of progress.

There are a few methods for advanced cubers that further reduce solve time: the Petrus system, Roux, and ZZ. In the early 1980s, Jessica Fridrich developed one of the most popular methods used by speedcubers today: CFOP. This method divides the cube into layers and solves layer by layer using memorized algorithms for each step while not scrambling the solved blocks. There are multiple algorithms to memorize, however, after considerable practice, the steps become intuitive.

This method is based on familiarity with Rubik’s Cube notations and previous knowledge of solving using the beginner’s method. With CFOP you may start with any face, however, for standardization’s sake, we will begin with the white face. The first step is to form a white cross where the edge piece matches the centerpieces on the adjacent face. After gaining experience with this method you will begin to predict the moves. The first phase usually includes 6 rotations but at most 8. 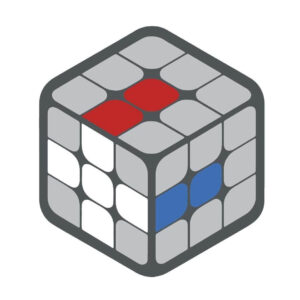 In order to achieve quicker times, always hold the cube with the white facing down. After practicing this method you will know what’s on the bottom face by a combination of looking at the top face, your moves, and the scheme of the other faces. Although some cubers prefer solving the cross on the left side we recommend solving it on the bottom face, as it is an efficient position for finger tricks and looking ahead. Be aware there is a steep learning curve for this method with beginners since you don’t see your mistakes. You may begin with the cross on top however this will make it impossible to break the 20-second threshold.

Solving the white cross is intuitive and doesn’t involve algorithms. Next place the white edges. There are a few possible scenarios, each with a specific algorithm. In the first example turn the edge piece to the correct place. The second example involves reorienting a piece. The third example instructs you how to place 2 pieces- the corner and the edge correctly. The fourth example when the cube is the most scrambled requires 6 steps to complete the “superflip”. Practice these moves without stopping and while keeping the white cross facing down. Once you have this step down move forward to the next step: F2L.

One of the ways in which CFOP saves you significant time on your solve is by completing the first two layers simultaneously. After completing the white cross we solve the white corners together with the middle layers. Although it’s possible to solve this intuitively it is handy to print out the 41 algorithms as a reference guide. To further improve your times practice predicting as many moves forward as possible and avoid turning the cube.

The following example illustrates a situation where the red-blue edge piece is placed correctly while solving the white corner. The red-blue corner must be in this back-top position for this example.

In the next example, the white sticker faces up. The first step is to match up the corner to the edge piece, then place them together correctly.

After solving a block do not break it up. In the following example, instead of F U2 F’ we are going to do U’ R U2 R’ in order to not break up the blue orange block.

Double turns help achieve even faster times. Notations for double turns are commonly written with lowercase letters, such as u = 2 upper layers clockwise. The following are the multiple possible scenarios when trying to attach the white corner to the corresponding edge. 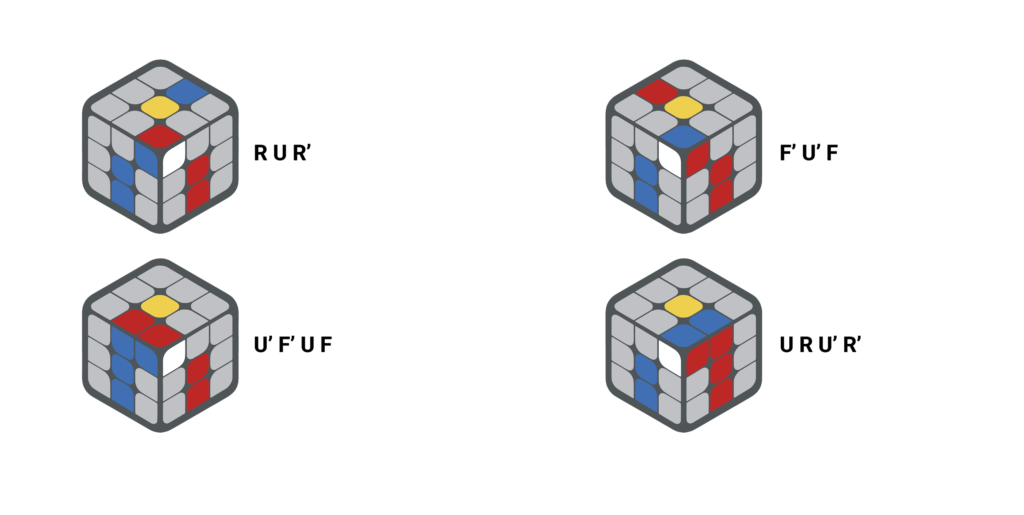 2nd case: Corner in the bottom, edge in the top layer 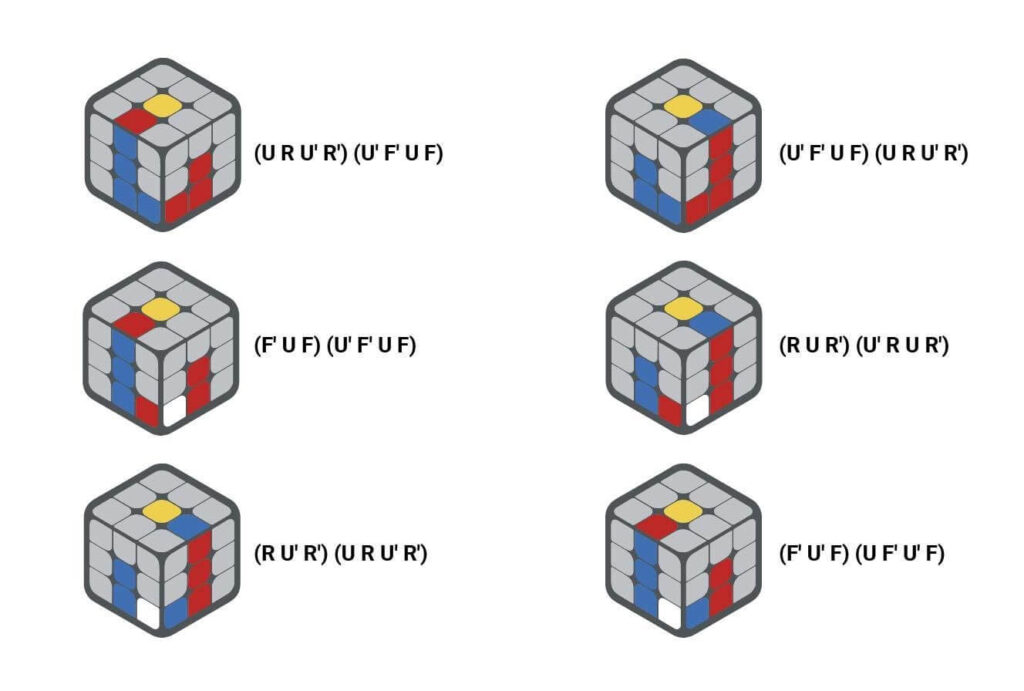 3rd case: Corner in the top, edge in the middle 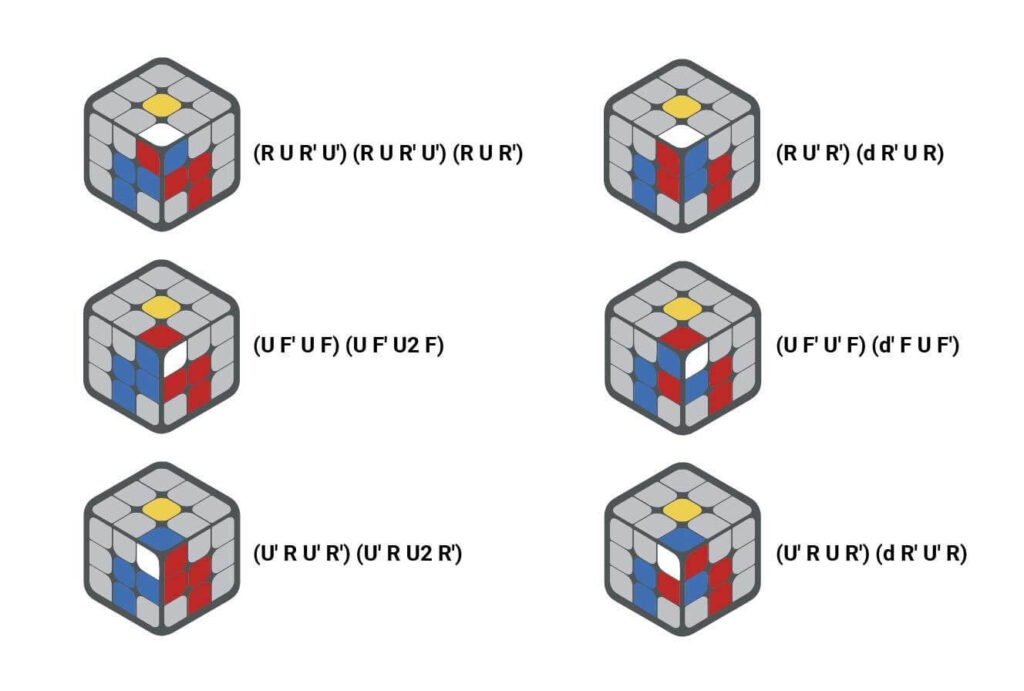 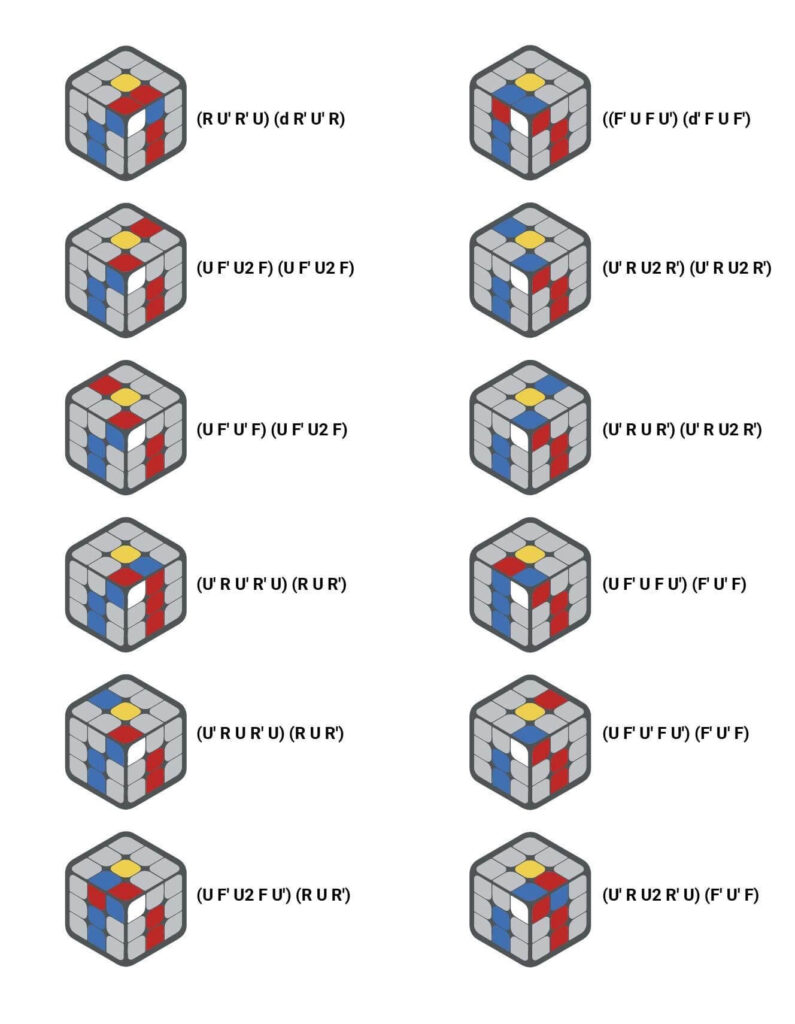 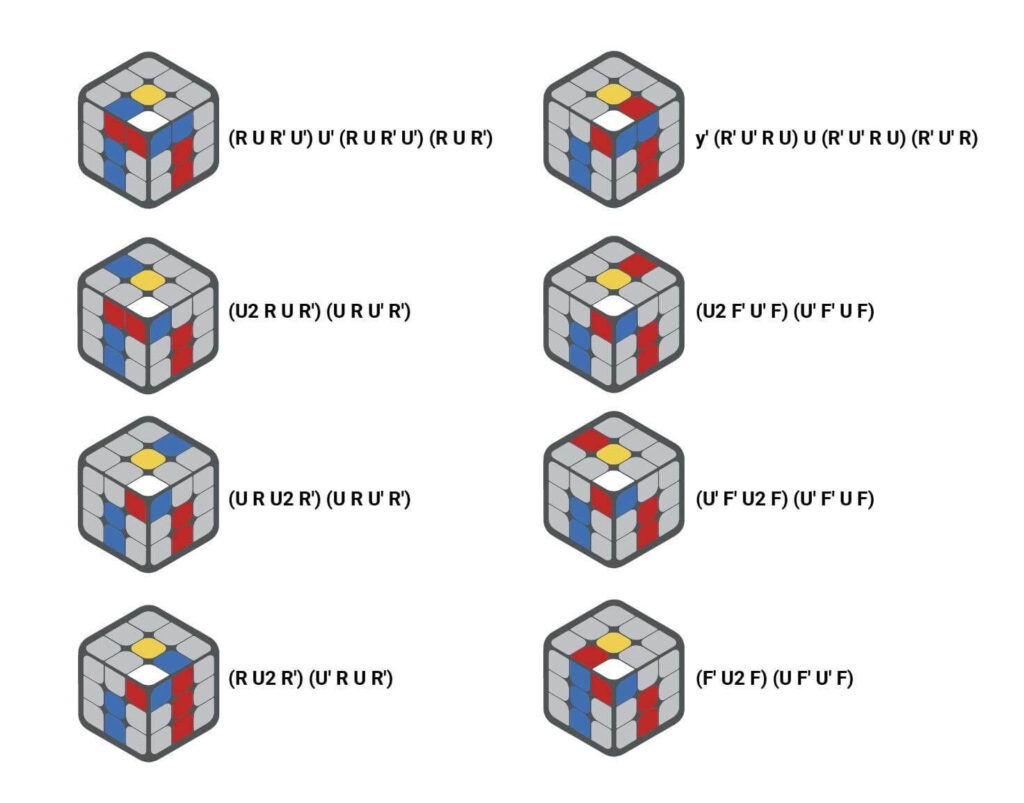 6th case: Corner in the bottom, edge in the middle

After solving the first 2 layers (F2L) we orient the last layer (OLL). This step completes the upper yellow layer. It’s ok if the sides are not solved, the last step- permute the last layer (PLL) will take care of this. OLL has 57 possible algorithms. Alternatively, you can memorize the slightly slower method of 2look OLL that uses only 9 algorithms. 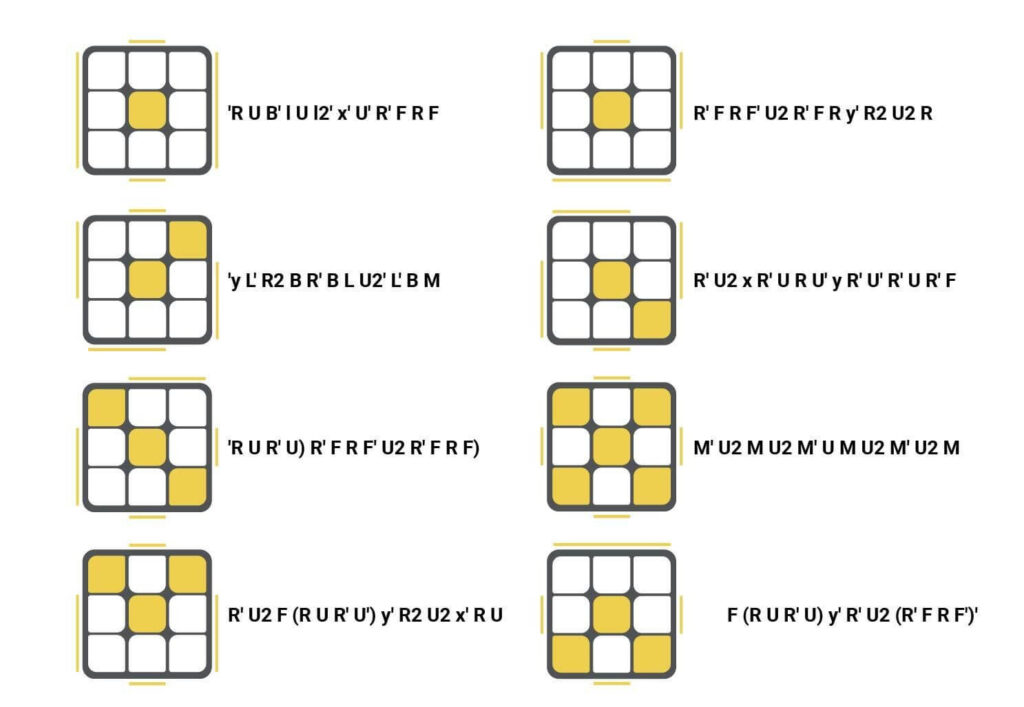 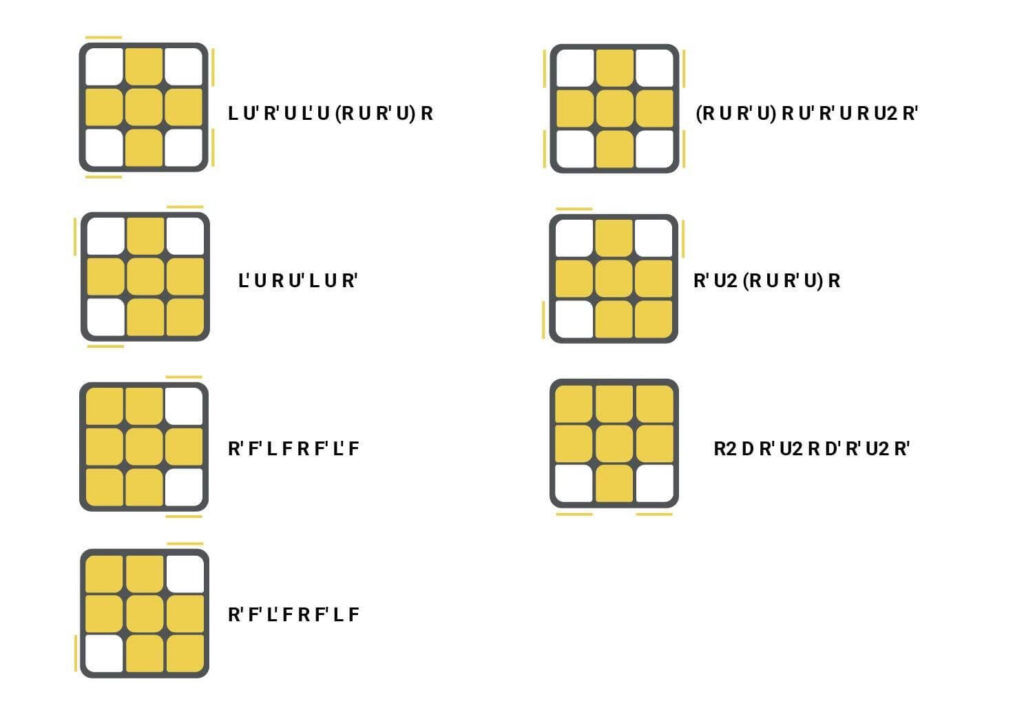 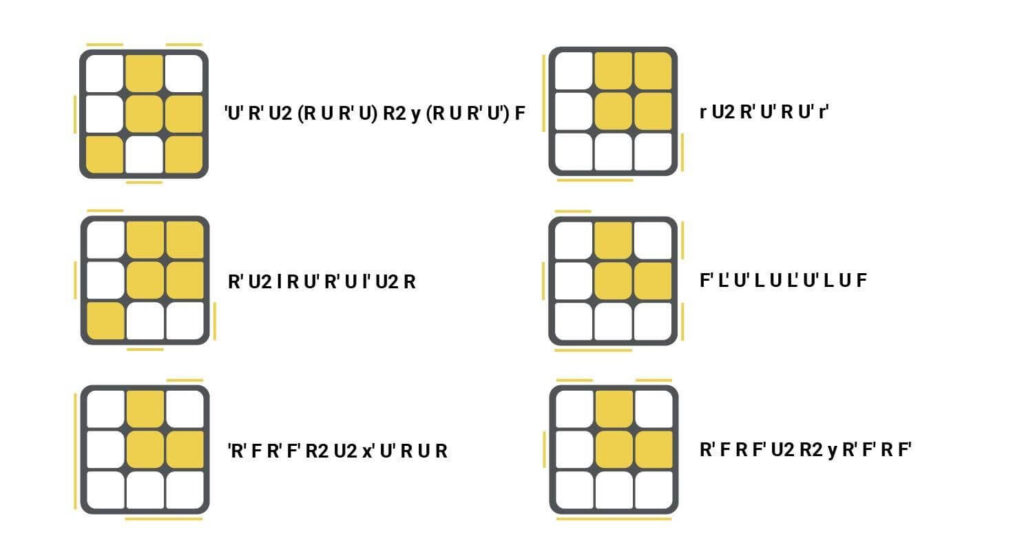 The last step is the permutation of the last layer (PLL). The white cross and the first two layers are solved by this point, and the last layer pieces are oriented. This step completes the solve.

As a quick reminder on notations: X & Y are whole cube rotations and lowercase u is a double layer turn.

Begin by rotating the top layer to align as many pieces as you can. There are 21 possible algorithms listed below. Alternatively, you can memorize the slightly slower method of 2look PLL which uses only 6 algorithms. The arrows show the direction of the permutations you need to perform in order to solve the yellow face. 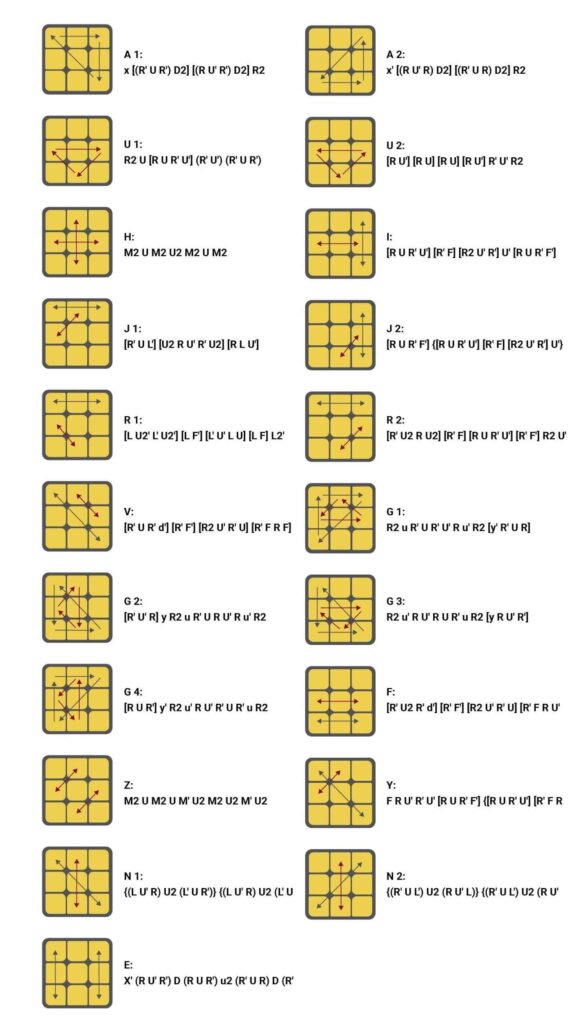