How to Solve 2x2 Rubik's Cube

The 2×2 Rubik’s Cube, also known as the Pocket Cube or the Mini Cube is the smaller version of the Rubik’s Cube with only two layers.  Although it might seem simple, the puzzle has more than 3.6 million possible permutations. It’s impossible to solve it by randomly twisting the faces.

With enough time, most people can figure out how to solve a single face. The thing that makes twisty puzzles challenging is that if you want to preserve what you already completed you have less freedom to move pieces around without messing up the solved face. This is where algorithms come in. These move sequences allow you to create change in the unsolved part of the cube while at the same time preserving the solved part of the cube.

This article will teach you to solve the 2×2 cube from start to finish.

Larry D. Nichols invented a 2×2 “Puzzle with Pieces Rotatable in Groups” and filed a Canadian patent application in the year 1970. Nichols’s used magnets as a mechanism to hold the parts together. Nichols received his patent on 11 April 1972, two years before Rubik patented the Rubik’s Cube. The 2×2 cube is an official WCA competition event, with the world record at 0.49 seconds.

Designers over the years have drawn inspiration from the original 2×2 Rubik’s Cube to create many more versions of mini-twisty puzzles. Justin Eplett designed a variation called Meffert’s Pocket cube, basically a 2×2 within a 2×2. The Pyramorphix is the mini version of the Pyraminx, with only 4 pieces. The Kilominx is the dodecahedron-shaped puzzle and is the mini version of the Megaminx. There are many more examples inspired by the pocket cube such as the Ghost Cube, the Mirror Cube, Inside out 2×2 , and the Siamese puzzle.

There are a total of 2 horizontal layers (top, middle, and bottom layer) in a 2×2 Rubik’s cube. This guide helps in solving the Rubik’s cube one layer at a time. The 3×3 Rubik’s Cube is composed of edge pieces, center pieces, and corner pieces. On the other hand, the 2×2 is made up of just 8 corner pieces and much simpler. If you know how to solve the 3×3 then it should be easy to learn the 2×2.

An algorithm is the order of moves which you need to follow in a specific sequence. 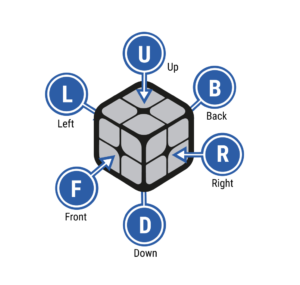 Although similar to the 3×3, there are two cases that are specific to the 2×2. When two pieces are swapped on the last layer. Use the algorithm in the captions to solve these cases.. 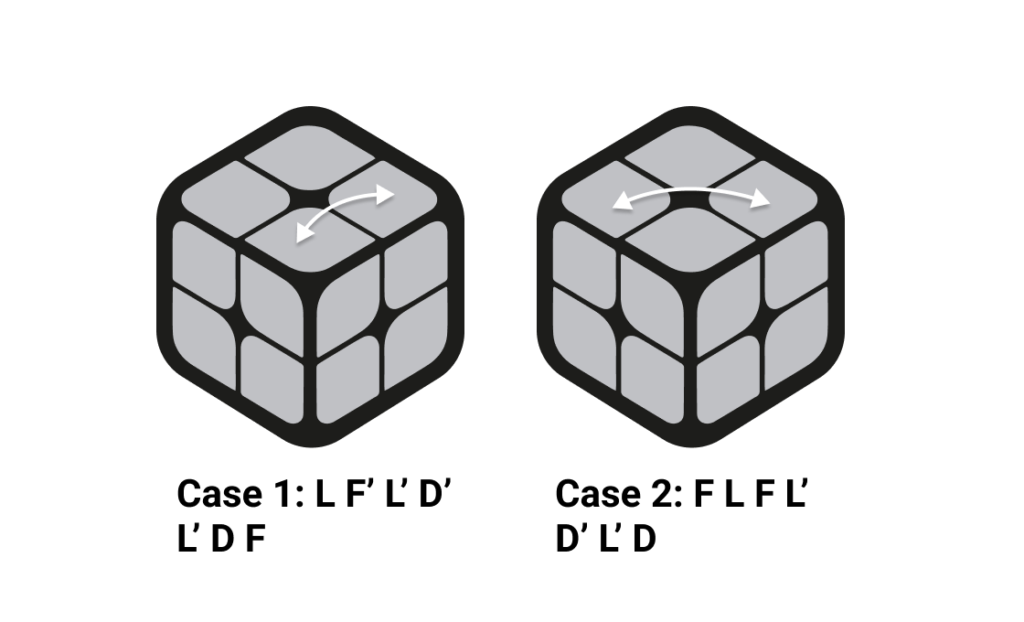 Begin by solving the white face. You can solve this using intuition, no algorithms necessary. The colors on their sides must match up, as shown in the illustration. 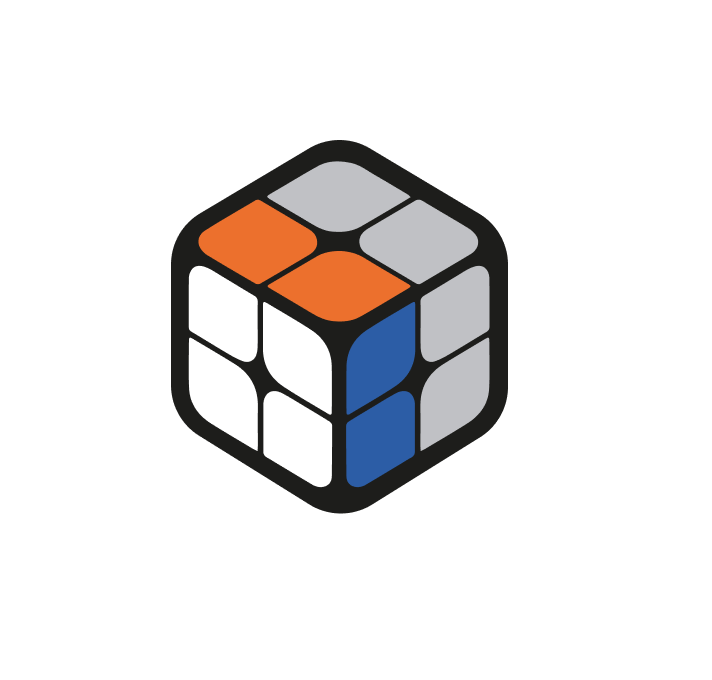 The following are algorithms to move a piece from the back face to the front face. There are three possible orientations of the piece so we need three algorithms to position the white pieces.

Case 4: After the piece has been correctly positioned but not yet oriented, the next step is to send it to the back layer. Then follow the appropriate case (1-3) for solving the white face.

Position the white face so it is facing down. Spin the upper layer and check how many pieces can be moved to their correct position. Don’t worry about orientation yet, we will take care of that in the next step.

Case 1: Only one piece can be moved to its final position: Perform the following algorithm U R U’ L’ U R’ U’ L while holding the correct piece in the front-right-up position to cycle the other three corners.

If you followed all of the steps properly so far by now the pieces are all in their correct positions. All that is left is to correctly orient them. Holding the cube with an unsolved yellow piece in the FRU (front right up) position, perform the algorithm R’ D’ R D either twice or four times, until the piece is correctly oriented. Bring another unsolved piece to the FRU spot using U’, then repeat R’ D’ R D  twice or four times, until it is correctly oriented. The algorithm must be performed twice in order to turn the corner counterclockwise, and four times to turn it clockwise.

The 2×2 is the perfect beginner twisty puzzle. Since the 2×2 is smaller than the traditional Rubik’s cube it can be more easily transported, making it the perfect item to take with you on the go. It is a great gift for younger or newer puzzle fans who are not yet familiar with the 3×3. The pocket cube builds the confidence and skills needed for more complex puzzles. Using this guide, you will be able to solve your first twisty puzzle. Happy cubing!