If you’re a Rubrik’s cube enthusiast, you may have thought about competing at a Speed Cube competition at some stage. Regardless of your level of skill or experience, there is a set of rules laid down by the World Cube Association that competitors need to follow at official events.

Depending on the kind of competition you participate in, there may be different kinds of rules and guidelines specific to certain events. For example, clock solving has its own rules, as does blindfolded solving. This article breaks down the different styles of solving at events sponsored by the World Cube Association (or following the WCA rules), as well as the more general rules that should be followed at any Rubrik’s Cube competition.

As per the rules set by the WCA, your competition should have some form of adjudication. For the competition to be official by WCA standards, part of the judging must include a delegate from the WCA itself. This delegate helps to ensure that the competition and its judging follows any relevant regulations stipulated by the WCA.

Each event has to have a minimum of one judge. There can be several. In addition, competitors themselves need to be available for judging. A competitor can only be exempted from this regulation if there are extenuating circumstances or if the competitor has a ‘legitimate reason’ for not judging (for example, being asked to judge a puzzle that the competitor is not familiar with).

The WCA has a set of regulations regarding who is allowed to compete in its events. To begin with, any individual can compete in a WCA-sanctioned event, provided that they follow the rules and don’t have a sanction imposed on them by the WCA at the time of competition. However, competitors below the age of 18 must have consent from their parents in writing prior to the start of the competition. They should be able to prove this consent in order to participate.

It’s important to note that the WCA keeps a registry and database of competitors in its events. Someone who has already competed in a WCA event and who wishes to participate in a subsequent competition must provide personal information upon enrolment that is consistent with the profile they already have with the WCA. As such, if your details have changed since you last competed, you should contact the WCA to inform them of this prior to your next competition. 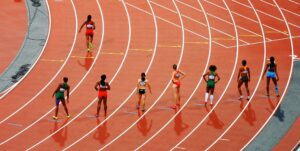 If you want to compete in an event sanctioned by the WCA, you must provide your puzzle. Also, the puzzle needs to be functioning normally in order for it to qualify. It should have an approved color scheme. Colorblind and blind competitors may use puzzles with textured surfaces or patterns if it is deemed medically necessary.

Competitors in WCA events may not use puzzles that have electrical components, or which can connect to Bluetooth or Wi-Fi. In addition, competitors who are not blind or color blind are not permitted to have modifications that ‘enhance the basic concept of a puzzle.’

Scrambling should be performed by a scrambler. In addition, the scrambling patterns themselves should be generated by a computer prior to the competition starting. The sequences that have been created by the computer should be checked before they are applied to the puzzle itself. This is to ensure that the scrambles adhere to further rules laid down by the WCA.

There are also specific scrambling orientations for the different kinds of puzzles and patterns. Once the scrambler has scrambled a puzzle, they must verify that they have done so properly before allowing the competition to begin.

The WCA rules allow for different events like speed solving, blindfolded solving, one-handed solving, fewest moves solving, clock solving, and multi-blind solving. Each of these events has its own further set of rules and regulations in order to ensure the competition is properly run and administered.

In addition to its permanent rules, the WCA may lay down further regulations temporarily where it sees fit. This is often done in response to global events or circumstances, as well as in manufacturing standards. As such, you must ensure to check the WCA rules if you plan on holding a Rubik’s Cube competition. You may find that the regulations have been changed recently or that there are temporary regulations in place. Failing to follow these regulations may result in the competition being regarded as illegitimate or not recognized by the WCA.