Aaron: Story of a 10-Year-Old Speedcuber

It is a rare event to meet someone that is so obviously a rising star. Here we catch a glimpse of one such case with Aaron, the story documented by his dad Peter. Read his incredible story going from zero to speedsolving in just over a year.

Meet Aaron Fung, a 10 year old boy from Hong Kong. He enjoys video games and watching YouTube. He also likes karate, swimming, basketball, snooker, soccer and drawing. He received his first cube on 26th December 2020 – an original Rubik’s cube which sparked his cubing journey. I wanted to let him try the original cube before investing in a GoCube. 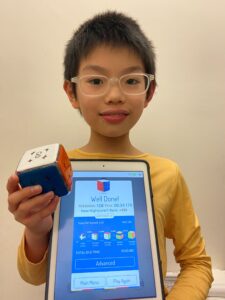 Due to the pandemic, Aaron cannot go to school but has been going to class online instead, for over a year. He spends 3 hours in video class every day. Other than that he also spends 1 hour playing video games and watching youtube. A few days before last Christmas, Aaron told me that he wanted a GoCube, which he had seen in a review on youtube. I documented the whole incident here .

Aaron was attracted to the GoCube, a smart cube with lighting that allows online worldwide battles. However, I was worried that it was a passing phase. So I told Aaron I would buy him a GoCube once he solved the Rubik’s cube.

Aaron had never cubed before, and it took 7 days for him to figure out how to solve it using the beginner’s method. Initially it took him 4 minutes to solve. On day 8, Aaron received his GoCube!  He found that the GoCube turned faster and smoother, and he liked playing the games in the GoCube app. The most important feature is the “Stats” page which shows Times, Moves, Idle and TPS. This encourages Aaron to achieve faster times. After playing with the GoCube for 3 weeks his time improved from 4 minutes to 1 minute.

Aaron’s cubing hero is Feliks Zemdegs. When Aaron searched anything related to speedcubers on YouTube, Feliks Zemdegs always appeared on the first page. Feliks Zemdegs is like a Superstar for cubers around the world. Aaron watched a video about how Feliks got a WR sub5, and then he told me that his goal was to be as fast as Feliks.

I am Peter, Aaron’s dad. I learned about the Rubik’s Cube 35 years ago and at that time the  Rubik’s Cube was viewed as a toy for geniuses. Recently my son reminded me of the toy and I discovered that today cubing has become a sport! Aaron was attracted by the GoCube initially, and now he is now totally submerged into the world of speedcubing. I read about the WCA and Red Bull Rubik’s Cube World Cup, and learned that cubing is not just a hobby, but also a sport. We do know reaching the top level is not easy, but it’s his dream and we support him!

Aaron found his passion for cubing;  his goal is to beat Feliks Zemdegs. What I do to encourage him to increase his speed is to set the reward targets. The first target was a 1 minute solve time and the reward was the Rubik’s Connected Cube. Then for every 5 seconds reduced he receives a cube related reward (such as 4×4, 5×5, timer…). Now as of April 2021 his PB is 27 seconds using Beginner’s method. 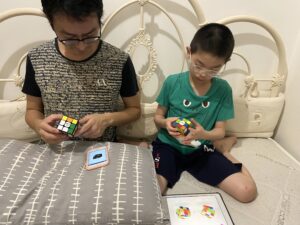 Solving a 3×3 cube is easy; achieving a sub-10 is not impossible. But since Aaron’s target is Feliks Zemdegs, that means the target is to achieve an average of sub-6. This is a really big challenge for me. I have done research to create a training regimen for Aaron. Luckily we have the GoCube + Rubik’s Connected to provide us with detailed statistics so that we can have a clear timeline of our progress.

Passion is just like fire, and in our case the GoCube was the match to ignite the fire. When Aaron plays with the GoCube, he can see his time during the solve. This motivates him to be faster, just like with most video games. Aaron is so happy when he achieves a milestone sub-60, sub-50, sub-40…..He always shows us the GoCube app screen, and our whole family celebrates with him. His goal of becoming a speedcuber is happening naturally! What we do is share the happiness with him, and let him enjoy the game with no pressure. 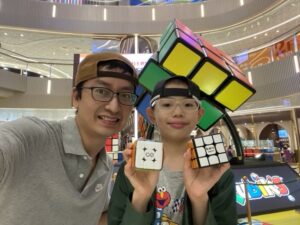 We can’t wait to see you at the next world championships, Aaron!