All About Jessica J. Fridrich

Jessica J. Fridrich is seen to be an expert in both steganography and the forensics of digital multimedia. Steganography is the art of concealing a hidden message within a non-secretive image, video, or even text. Professor Fridrich is viewed as a celebrity and the world’s leading authority in the field of steganography among her colleagues and peers. Digital Forensics is a forensic science branch that involves the investigation and recovery of information stored in digital devices.

Professor Fridrich published: Steganography in Digital Media: Principles, Algorithms, and Applications” (Cambridge University Press) in 2009. This publication has become a highly influential textbook for graduates in the field of steganography.

When it comes to professor Fridrich’s involvement in the field of forensics, she both developed and patented a method for “fingerprinting” digital photos. This method allows for digital images to be reliably linked with a camera. Professor Fridrich’s patented process is the only method that has been officially approved to be used for gathering evidence that can be used in a court of law.

It is approved due to it passing the Daubert Challenge. This challenge must be passed by meeting certain criteria for evidence to be considered admissible in a court of law. Her research has prompted over 150 umpired publications, as well as over 16 000 citations and seven patents, which have all been prosperously commercialized.

Among these accomplishments, Professor Fridrich has other research interests outside of steganography and digital forensics. These research interests include signal estimation and detection, steganalysis, and machine learning. She has also been the recipient of the 2002 Chancellor’s Award for Outstanding Inventor as well as the 2006-2007 Chancellor’s Award for Excellence in Scholarship and Creative Activities. 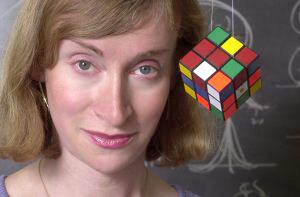 Over and above being an outstanding academic, professor Fridrich is also a speed-cuber who has competed in various WCA (World Cube Association) approved events. She has competed in four WCA competitions and has completed 33 solves in them.

Speedcubing involves completing a variety of puzzles based on the famous Rubik’s cube puzzle as quickly as possible. This is an activity that requires extreme talent as well as extraordinary memory. Participants compete in speedcubing competitions where they compete amongst themselves to obtain the fastest solve times. Speed-cubers employ different techniques, using their preferred approach to gain an edge over their competitors by cutting out unnecessary movements.

Professor Fridrich has a current personal record of competing in the 3x3x3 cube competition, with an average completion time of 20.48 seconds and a single fastest time of a staggering 17.12 seconds.

An Overachiever of Note

Professor Jessica J. Fridrich is an individual who strives for excellence in all areas in which she takes an interest. This is evident from her success in both her speedcubing as well as her decorated academic career. Her mind is truly a marvel and one that we are fortunate to have on our team.