What is the Best Rubik's Cube Online Timer That Most Cubers Use?

The Rubik’s cube needs to be solved according to certain rules and regulations set by the World Cube Association (WCA). To judge the prowess of a player, one needs to use a timer to track how quickly they can solve the cube while sticking to the event’s regulations. These timers are specifically designed for cubers and are available on different platforms. Picking the right one depends on the device or operating system on which an individual plans to run the timer.

What is a cube timer?

Rubik’s cube timers help track how quickly a player solves the puzzle. Cube timers are compatible with 3x3x3, 4x4x4, 5x5x5, 6x6x6, and 7x7x7 cubes.  They need to be started just when a cuber begins to solve the cube, and stopped when the puzzle has been completed.

They track a cuber’s solve times and display statistics so that cubers can easily track their improvement over time. Some of the best cube timers tabulate and chart statistics on pictorial graphs for easy comprehension.

Why are cube timers required?

Most psychological and intelligence tests are timed. To accurately judge the prowess of a test taker, psychometricians factor in the time taken to successfully complete assigned tasks. For instance, IQ tests often have a pattern recognition test. A person’s IQ is derived based on how quickly they were able to solve these pattern recognition tests, alongside other tests as part of an intelligence test battery.

As Rubik’s cube is a cognitive puzzle, it employs a similar strategy to judge how good a speedsolver is. The game necessitates the use of recognized timers to rank the players and judge their skills. In addition, timers can be used by players themselves to track their progress or skills, while practicing.

Which are the best speed cube timers?

1. CsTimer and Cubing Time for Mac and Windows desktops and laptops

CsTimer is a professional timing program specifically designed to help track solve times as quickly and accurately as possible. This cube timer is available for both Mac and PC. It has a highly interactive interface that can even be customized to one’s liking. It has training settings to help cubers improve their moves with the help of various scramble algorithms. Although it does not offer any graphs, it is preferred by most professional cubers who seek to improve their skills at solving the Rubik’s cube. 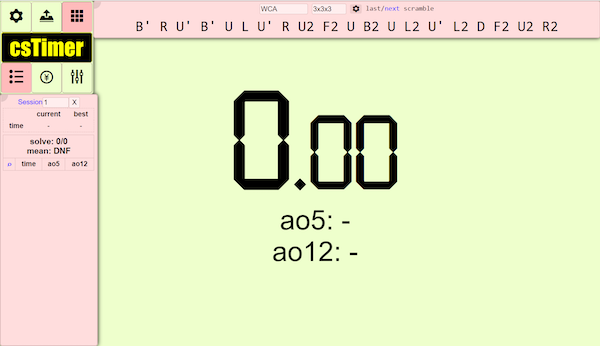 An alternative is Cubing Time, which is designed to operate on both PC and Mac devices. This timer does have graphs but has a limited number of sessions that one can track.

Chao Timer supports an unlimited number of sessions and tracks time in a user-friendly manner. It features quick and simple hand gestures to start, end, and restart the timer. The use of these shortcuts can prove invaluable while attempting to save a few milliseconds of solving time. This app also has the option to turn on WCA inspection.

An alternate option for iOS is the ZYX Timer. It is very similar to Chao Timer and offers additional options like OLL, PLL, and LL practice sessions.

The most popular Rubik’s cube timer among Android users is Twisty Timer. It is user friendly and represents statistics and data in a pictorial form. The other option for Android devices is a timer called Cube Timer. Although very accurate and effective, it has the drawback of multiple ads. 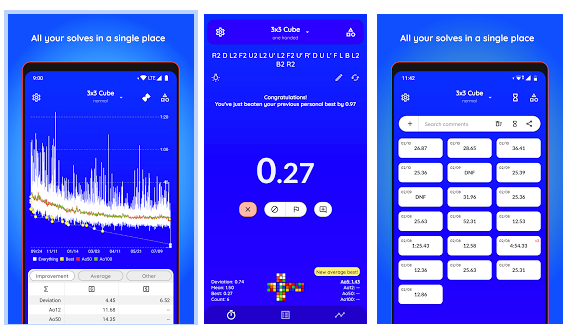 Cube timers are essential applications that help players and professionals to track how quickly they are able to solve the Rubik’s cube. They are used not only during practice but also during championships to judge the prowess of a solver. It is difficult to declare a certain timer as the best Rubik’s cube online timer. It really depends on the device that an individual might use while tracking the solving time. As a result, there are different online timers specifically created for operating systems such as Mac OS, Windows, Android, and iOS.