The Rubik’s Cube, The Cube Puzzle, the Magic Cube – it’s not just a puzzle, but a symbol that has transcended its own origins. It’s gained so much recognition that even Google has an interactive 25-foot-tall exhibit to commemorate its popularity.

With around 350 million cubes sold since its release, there’s no wondering about how popular this puzzle creation really is. From music videos and TV shows to comic books and manga alike, the Magic Cube has cemented its place in pop culture.

The Origins of the Rubik’s Cube Tattoo

It’s estimated that modern-day tattooing started somewhere in the mid-19th century. With the Rubik’s cube garnering more and more attention since the early 1980s, there’s definitely a reason to believe that plenty of Rubik’s cubes have been needled into people’s limbs since the start of the new millennia.

Whether it’s a cherished childhood memory or just the love for all things bright and colorful, the cube is probably one of the most recognizable tattoo pieces out there. It also comes in a variety of different colors and sizes, which means there’s a lot of options out there for those looking to get it inked.

This is our list of the best Rubik’s Cube tattoos out there – both to be admired and to inspire!

When it comes to finding a good matching tattoo, the Rubik’s cube is a pretty good choice. This piece includes two different cubes, one featuring the classic look while the other harbors an inverted color design. Whether getting it with a sibling, a partner, or a best friend, a tattoo like this will show off your connection and keep your individuality as well!

Having the Magic Cube as a tattoo is one thing, but having an entire limb inked shows off some serious dedication. This piece features a long cube pattern from the thigh down to the ankle with some pretty clever 3-D cubes painted to look like they’re falling down in sequence. It also includes the classic Rubik’s colors that add a more vintage look to the piece. 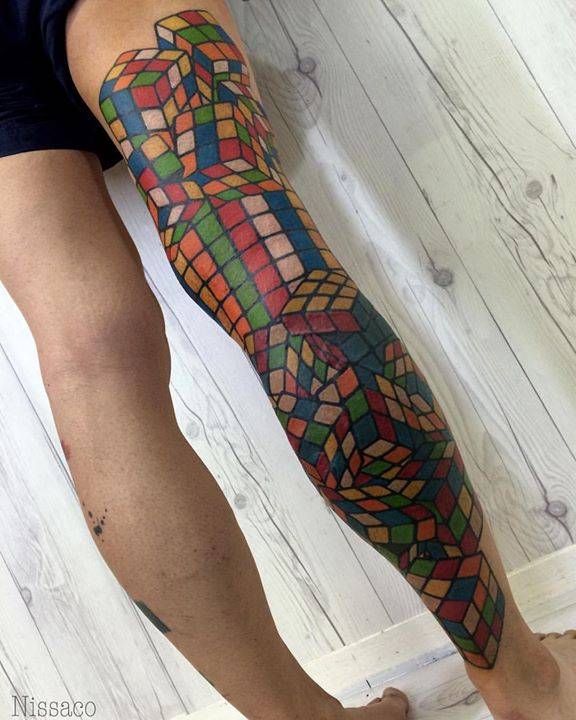 A detailed piece over the heart can definitely show off your love for the Magic Cube. This tattoo featuring a melting cube not only incorporates the classic colors but also has pin-precise shading on the colorful squares which give the cube a used look – a really cool look! Moreover, the watercolor effect at the bottom of the tattoo really brings out those bright colors.

The fun with the puzzle cube is all about solving it. It’s a tedious process for beginners and a fun challenge for the more experienced, but that all-familiar clicking and clanking process is unmistakably nostalgic. Getting two or even three tattoos showcasing the process is bound to make for some pretty impressive ink!

For the more subtle tattoo lovers out there, getting a Rubik’s cube tattoo that isn’t as striking may be difficult, but not impossible. This design includes the famous 3-D shape without the outlines. A perfect demonstration of how to incorporate a love for the cube into a tattoo without having it stand out too much.

An Abundance of Choices

The good thing about a Rubik’s tattoo is that there’s enough cube variety in the world that can produce works of art with the smallest of imaginations. Tattoo artists can make some seriously stellar-looking pieces with everyone’s favorite puzzle cube. Whether it’s a bold, out-there, full-body piece or simply a tiny addition to a collector’s arm, inking the Magic Cube is a special kind of art!