What Is The Difference Between Chess And A Rubik’s Cube?

How Chess and Rubik’s cube are played

Chess is an indoor game that’s played on a chequered board. It provides players with endless entertainment and encourages them to think of possibilities and imagine different moves they can make. In other words, chess is a strategic game that requires intelligence, imagination, and insight. It is the kind of game that you would not only play with your opponent but can also get lost in a strategy-building reverie.

Along with the board, chess requires chess pieces. These include tower, horse, queen, bishop, and many more. The game requires players to creatively use strategy while strictly adhering to chess rules.

The Rubik’s cube on the other hand is much simpler. It consists of just a cube that can be carried around everywhere. It is a 3D combination puzzle with six faces. Each face is covered by nine stickers in six different colors. These colors include yellow, blue, orange, red, white, and green.

A player has to use their eye-to-hand coordination and fine motor skills (using fingers and wrists to manipulate the cube) to ensure that stickers of the same color appear on each side of the Rubik’s cube. Although the rules seem simple, solving the cube requires dexterity and concentration along with problem-solving skills and mental agility. 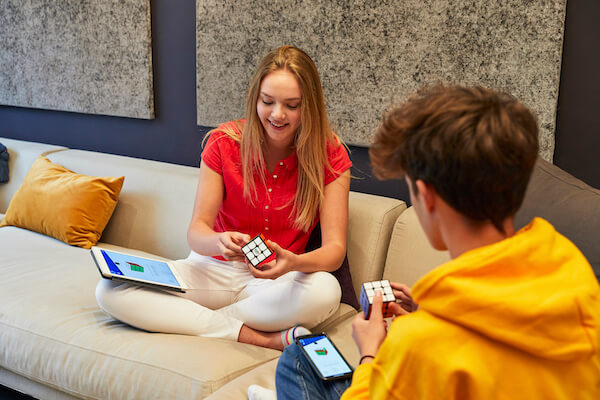 While both Rubik’s cube and chess are interesting portable games, there are some obvious differences between the two.

Chess does not require physical or motor prowess but is more of a psychological game. In addition, it requires two players and cannot be played while on the go. Although the board and the pawns can easily be carried around, players need to set them on a flat surface and sit in order to play.

On the contrary, Rubik’s cube is quite different. Although it is mostly a psychological game, it makes use of your eye-to-hand coordination and fine motor skills.  It can be played by a solo player, or with companions. Rubik’s cube is often described as a toy for the masses, as it is more easily accessible than chess, and can be carried around on the go.

Choosing between chess and Rubik’s cube

Many people choose chess over the Rubik’s cube because they believe it requires more strategic thinking. The downside is that it requires two players and cannot be played on the go.

The Rubik’s cube is an entertaining game that can keep you occupied for hours regardless of where you are or who you are with. You can solve it on the metro train or while curled up in your bed. Compared to chess, playing Rubik’s cube is a battle between you and your mind and requires both cognitive and motor skills. In short, it is a versatile and accessible game.

Rubik’s cube can be played on your smartphone too

Start learning to solve a Rubik’s cube with our top of the line smart cubes.