Over the last 50 years, the world of cubing has grown exponentially. If you read any cubing blogs or forums, there are a plethora of tips and tricks for solving the cube faster. This has sparked the development of specific cubing terms.

This guide is part 2 defining different terms in the world of cubing (part 1).

It is possible to be lucky with a single solve while speedcubing. That’s why the community places a huge emphasis on the best averages for each solver. In a competition, you may be judged for your Ao5, or average of 5 consecutive solves. The mean is calculated using 3 solves, while the fastest and slowest times are not counted. An Ao12, or average of 12 would be calculated similarly, using the mean of the middle ten solves.

For puzzles that take speedcubers several minutes to solve, a Mo3, or mean of three may be used. This is similar to the average, however all of the three solves are taken into account in the mean calculation.

Most cubers use the Friderich method, which begins by solving the cross. While most speedcubers stick to one color (most often white) as this makes pattern recognition easier, some cubers learn to remain “color neutral”. This means the player can create the cross from any of the six colors. The benefit to having this flexibility is the player can choose the most efficient solution for the cross and therefore speed up their solution.

Lookahead is a phrase commonly used among speedcubers using the Fridrich method looking to improve their speed. The F2L stage of the solution is the most time-consuming. A major emphasis is placed on being more efficient during this stage. Looking ahead is specifically referring to the step of pairing up the edges and corners that are inserted surrounding the cross. The common advice is to “look ahead” for the next edge and corner piece to pair as you are placing the one you have just paired. Although this sounds complicated many speedcubers memorize most of the F2L cases, and they become second nature after lots of practice.

The WCA (World Cube Association) hosts competitions with many types of events. BL, or Blindfolded, is where the solver memorizes the positions of the tiles on the cube before solving the puzzle blindfolded. 4BLD and 5BLD are versions of the blindfolded event with the 4×4 and the 5×5 cube. MBLD, or multi-blindfolded, is another variation where the competitor memorizes multiple 3×3 cubes and solves them all blindfolded. OH is short for one-handed. FMC is short for the fewest move count, where competitors attempt to solve the puzzle in as few moves as possible. 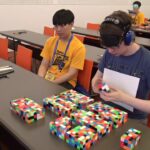 Scramble is a term that consists of randomly generated moves, expressed through the standard notation that will bring the cube to an objectively unsolved state. For the 3×3 a scramble is 20 moves. Official competitions use computer-generated puzzle scrambles in order to provide equal opportunity for all competitors.

As you can see, the world of cubing has its own specific terminology. After reading this, you will be able to decipher the tips and tricks by cubing blogs and forums.