How Many Types of Rubik's Cube are Available?

The Rubik’s Cube is a popular 3D puzzle game in the shape of a cube. It was invented in 1974 by Ernő Rubik, a Hungarian professor of Architecture. Each face of a Rubik’s cube is composed of smaller cubes that twist and turn. The goal of the puzzle is to solve the cube so that each face presents with one solid color – white, red, blue, orange, green, and yellow.

Since its inception, numerous variations and designs have been developed. The modifications include changes in the size, color, number of moving units, and medium. Today, there are multiple types of Rubik’s cubes available, and new ones are constantly developed for both commercial and research purposes.

One can broadly classify cubes into hardware-based and software-based, with a few like GoCube adopting a hybrid model.

Although the original Rubik’s cube has a 3x3x3 configuration, there have been other sizes inspired by it. Here are a few:

The term “twisty puzzle” refers to oddly shaped puzzles that are inspired by the Rubik’s cube. They are not cubes, but shaped differently but like the Rubik’s Cube need to be twisted and turned to be solved. Some of them include the Pyramix in the shape of a pyramid, the Skewb which only turns at the corners, and the Megaminx in the shape of a dodecahedron. There are innumerable shapes, sizes, moves, and algorithms for puzzle lovers out there. 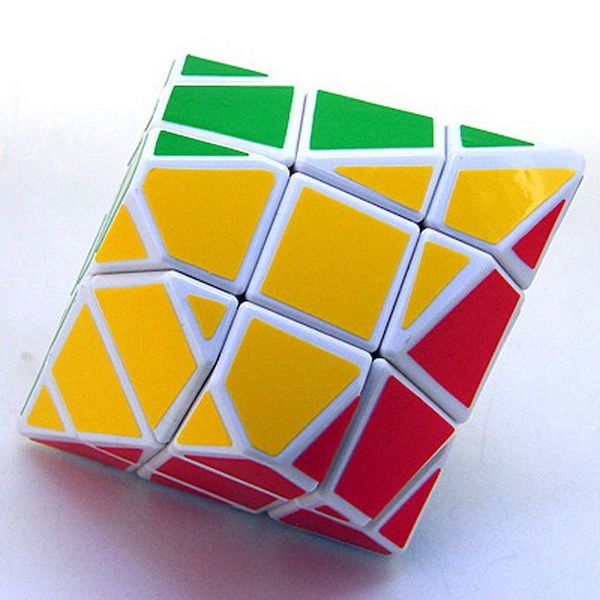 There are multiple video games, online and mobile applications, and even emulators that help players solve cubes and other twisty puzzles on a computer or a smart device. These puzzles are available as digital cubes and twisty puzzles and have a dizzying number of moves, twists, colors, sizes, and shapes.

There are large cube simulators for cubes up to Size 100+. However, these simulators cannot be solved on all kinds of screens or monitors due to pixel limitations. Visual perception places limitations as well. As a result, although it is theoretically possible to create infinitely large cubes and other complex twisty puzzles, both hardware and human limitations render them impractical.

Hybrid cubes such as the GoCube make use of both a physical cube and a corresponding software application, usually on a mobile device. Users can twist and manipulate the physical cube, while it syncs the data to the application, where it can be tracked or shared with others.

GoCube comes with social networking features as well, so that players can connect with other cubers across the world. An application installed on the user’s smart device tracks and simulates the cuber’s moves in real-time, which can be viewed on a smart device. It gives a detailed analysis of the player’s skill levels.

Designers have begun to experiment with 3D printers to print variations of the Rubik’s Cube, as they open the possibilities to endless twisty puzzle combinations. Some of the notable 3D printed twisty puzzle designs include the rexoctahedron3 and the current world record holder, the 22 x 22 Rubik’s Cube by core puzzle. 3D printing technology also improves the user experience of the cube by eliminating various speed-reducing factors.

The Rubik’s cube continues to inspire a range of physical cubes, digital cubes,  and twisty puzzles today. Physical puzzles inspired by the Rubik’s cube come in various shapes, sizes, and configurations. Software cubes allow users to solve puzzles on a computer or a mobile phone, while hybrid cubes such as GoCube make use of a physical cube that syncs with a corresponding mobile application to track data and connect with other users.

In short, there are just too many Rubik’s cubes and twisty puzzles available today to make a comprehensive list.