CFOP (Cross, First 2 layers, Orientation of last the layer, Permutation of the last layer) is one of the most popular speedcubing methods. It is also known as the Fridrich method after its developer, Jessica Fridrich. The method’s popularity is in how it helps speedcubers solve the Cube in significantly fewer moves than the beginners’ method. For the CFOP, the total number of moves for a complete solution averages ±56 compared to a much higher average of ±110 moves for the beginner’s method, which is almost double the number of moves in the CFOP method. The CFOP method hones in on the quickest and most efficient way to reach a solution rather than the simplest way of solving the Rubik’s Cube.

With a few adjustments, the CFOP is one of the most preferred and commonly used methods by some top speedcubers like Feliks Zemdegs and Max Park. It takes more time and effort to master the CFOP than the beginner’s method because it has additional algorithms that need to be learned and practiced. Although the CFOP has a higher degree of difficulty than the beginner’s method, it compensates for this by helping speedcubers achieve much faster solving times once mastered. Reaching sub 30/20/10 solving times and the world record is attainable with practice.

The first step of the CFOP is solving the cross, which entails solving the four edge pieces of a chosen first layer. When this stage is solved correctly, the four edge pieces take the shape of a “cross.” This step is practically identical to the beginner’s method’s first step, with only one deviation. The cross has to be solved from the bottom instead of the top, eliminating the need to flip the cube upside down. This alteration allows for a quicker transition to the next step, saving valuable time.  Solving from the bottom also facilitates visualization and thinking ahead as to which pieces are required for the next step, a key principle in becoming a successful speedcuber.

Another pointer to master this move is selecting and sticking to one color to solve the cross. The majority of speedcubers choose to start with white. Choosing and sticking to one color enables a speedcuber to memorize the color-scheme and recognize the pieces to solve in the next step more quickly. This is particularly important in the F2L. This step can be done intuitively without using any algorithms. 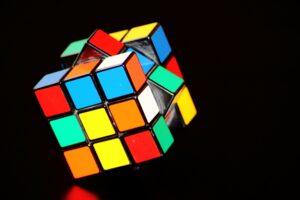 The second step involves completely solving the first two layers, hence its name. This step corresponds to the third and second steps of the beginner’s method. A total of eight pieces need to be solved. These pieces are solved in two layers, starting with four of the first layer corner pieces and four middle layer edge pieces. This requires pairing a matching corner and edge piece and placing them together in their slot.

F2L is a crucial step to speedsolving as this is where the majority of the time gains are realized.   The reduced solving time can be attributed to having a view of the top side of the Rubik’s Cube, planning the next step ahead of time, and improved cubing techniques that eliminate unnecessary rotations.  This can lead to extremely fast solving speeds even for inexperienced hands. There are 41 possible variations for the corner-edge positions, which can be solved intuitively without the need for algorithms.

The third step orientates the last layer at the top correctly so that it is one color. The step involves eight pieces: four corner pieces and four edge pieces, which can be solved in one algorithm, the one-look OLL or two, in the case of the two-look OLL. There are 57 possible combinations to solve the last layer, excluding the solved variation. Consequently, to fully master the one-look OLL requires learning all 57 algorithms. The two-look OLL only has ten algorithms to be mastered. Fortunately, some of these algorithms are covered in the beginner’s method.

The fourth and final step completes the Rubik’s Cube. There 21 combinations and, therefore, 21 algorithms that need to be learned to permute the last layer pieces. The pieces are composed of four edges and four corner pieces. Once again, some of these algorithms were learned in the beginner’s method (two in this case).

The CFOP method is one of the most efficient and widely used speedcubing methods. It is also popular among some of the leading speedcubers. Furthermore, many of the CFOP algorithms are also covered in the beginner’s method, making it a much easier switch to the CFOP.  There is a lot of information on the technique as it has been in use for many years.