Whether you’re a beginner Cuber or even a veteran, you’re most likely always on the lookout for new techniques and strategies to help you improve your solve times. Maybe you’re not looking to improve your time by learning a new algorithm but are rather just seeking to add more techniques to your repertoire. Whatever your intentions are behind learning the ROUX technique, this article is going to provide you with the introduction that you’re looking for.

ROUX is a speed solving method associated with the Rubik’s cube. This method was named after its inventor Gilles Roux and was proposed in 2003. This method of solving is based on block building and utilizing the corners first methods. Many speed solvers prefer this method due to its low number of moves and rotations and its ability to be easily adapted to one-handed solving.

This method uses fewer moves than the most popular method, the Fridrich method. Utilizing ROUX also allows for rapid improvements in terms of lookahead and inspection. The LSE step of the ROUX method is also easy to master. However, beginners may struggle to get used to the block building aspect associated with this method of solving the iconic puzzle. 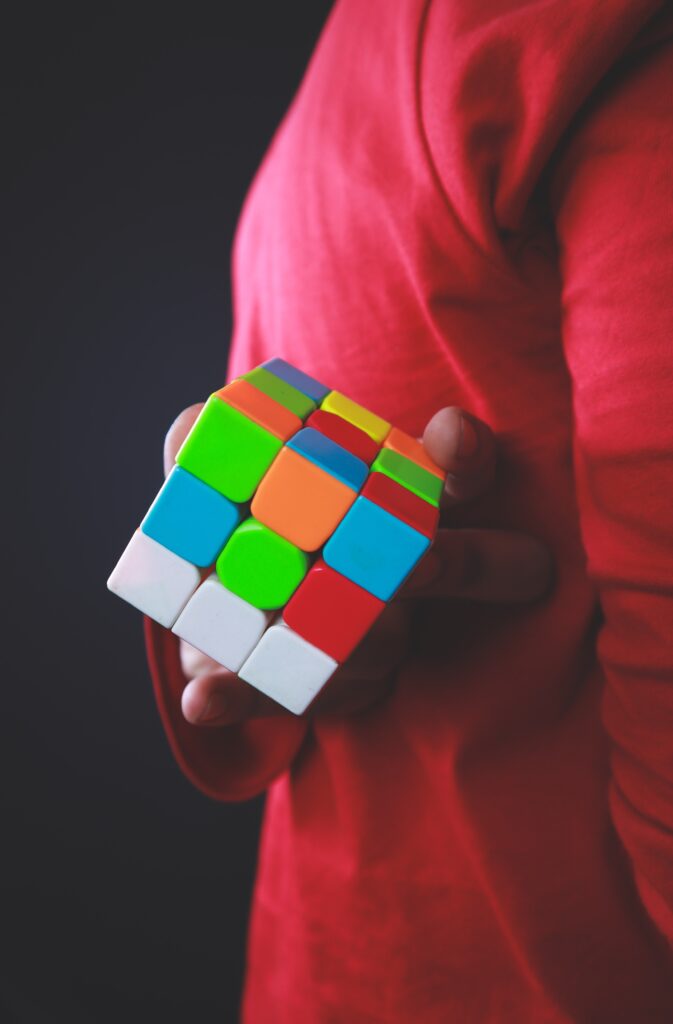 How Does It Work?

The ROUX method uses four steps. The first two steps involve building blocks, followed by the phase referred to as corners last layer, and finally, the last six edges step. Upon completing these four steps, the Rubik’s cube should be complete. The steps can become slightly complicated, and it is important to pay careful attention to these steps’ details.

The first step involves building the first block. This should be done by making a 3x2x1 block on the left side of the cube. Should you choose to follow the example set by Roux himself, the red should be on the down face side while yellow should be on the left. This means that you are going to be solving a block consisting of a yellow center, with a yellow/green, yellow/red, and yellow/blue edges as well as yellow/red/green and yellow/red/blue corners. To improve upon your time, you must attempt to plan this step while still in the inspection phase and complete this move without looking at the cube.

After you have completed the first step, you must now build a correlating 3x2x1 block on the opposite side of the cube to the first block. This block should consist of a White center with white/blue, white/red, and white/green edges. The block should also have white/red/green and white/red/blue corners. This step must be completed without disturbing the first block you have built, which is going to render the process redundant. This can be done by using only R, r, M, and U moves.

This step is sometimes referred to as the CMLL step due to different methods making use of very comparable methods also involving other CxLL abbreviations. This step is also referred to as the CMLL step because you are free to interfere with the M side of the cube.  Roux’s corner page can be confusing, and this can deter you from the method, but should you use his system for classifying the CMLL algorithms, it should simplify it for you.

After completing all previous steps, all that should be left are the front and back edges in the D layer and the four U edges. You should note that an edge piece is going to be correctly aligned if the D or U face color is in the D or U face. To simplify this, if you have the orange center on the U face and the red on the D face, you are going to know that an edge in the U layer is correctly aligned if it is either orange or red up. Similarly, you are going to know that an edge is aligned correctly in the D layer if it is orange or red down.

You should note that an uneven number of the six remaining edges cannot be incorrectly aligned but rather only an even number. To complete the puzzle, if the pieces for UR and UL are not in the same layer, you must adjust the U slice until they are diagonally opposite one another and then put M’ U2 M’ to place them in the same layer. After this, use M2 to place the edges into the D layer. Next, adjust U so that an M2 move places the edges between their matching corners. Adjusting U again should complete this sub-step, in turn completing the L and R layers.

Finally, using a combination of E2, U2, and M2 moves should solve the Rubik’s cube.

This article has provided you with an introduction to the ROUX method, and should you follow these steps, you are be completing the cube in sub 40 seconds in no time at all.