Once Upon a Cube: Rubik's Cube Full History

One of the most popular puzzle games today is Rubik’s Cube. It requires knowledge, focus, and full concentration to solve the puzzle. Aside from having a colorful appearance, it also has a colorful history. So, let’s check this out!

What is Rubik’s Cube?

The Rubik’s Cube is a three-dimensional combination puzzle invented by Erno Rubik in 1974. Erno Rubik is from Hungary and a famous sculptor in his country working as a professor of architecture. Originally named Magic Cube, this was licensed by Rubik to be sold by Ideal Toy Corp in the year 1980 through Tibor Laczi, a businessman along with the founder of Seven Towns, Tom Kremer. Rubik’s Cube won the German Game of the Year in 1980, with an outstanding award for Best Puzzle. In the year 2009, there are more than 350 million cubes sold worldwide, which makes it the top-selling puzzle game all over the world. Rubik’s Cube is widely regarded as the best-selling toy worldwide.

On the standard type of Rubik’s Cube, every six faces are covered with nine stickers, and each one of six solid colors such as yellow, green, orange, blue, and red. On the other hand, a number of later versions of the puzzle have been revamped to utilize colored plastic panels that prevent fading as well as peeling.  As of 1988 models, green is opposite of blue, yellow is opposite of white, and red is opposite of orange, and the white, red, and blue are sorted out in which order in a clockwise display. In early models, the position of the colors differs from one Cube to another. An interior pivot mechanism allows each face to turn independently, as a result mixing up the colors. For the Cube to be solved, every face should be returned to have the same color. The same puzzles today have been produced with different numbers of sides, stickers, as well as dimensions, not all of them by Rubik.

Even if the Rubik’s Cube reached its utmost popularity in the 1980s, it is still known as well as used from all parts of the globe. As a matter of fact, a lot of speedcubers keep on practicing it and the same puzzles; they also vie for the quickest times in diverse categories. Since the year 2003, the World Cube Association, the worldwide governing body of the Rubik’s Cube, has arranged competitions worldwide and recognizes world records. 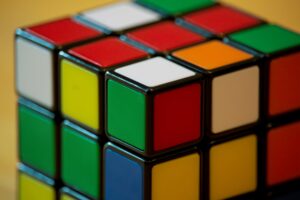 The creator of this puzzle game describes cubes as the product of a hermit who’s coming out of the shadows”. Rubik refers to himself as an intuitive and concrete thinker as well as a newbie investor. On the other hand, like his invention, he challenges categorization. His resume takes account of stints as a designer, architect, editor, professor, and now writer. He takes pride in his capability to self-teach and stands up at the idea, which those in authority are in the best position to pass on knowledge.

In the year 1975, Rubik’s application to the Hungarian Patent Office known as the Cube a spatial logic toy; at that time, the country was behind the Iron Curtain, it would stay a communist-controlled Eastern bloc state until the year 1989, and as he writes, the region has no specific affinity for the production of the toy.

Before, puzzles were only a small piece of the overall toy market- you can just find them in specialty stores as well as souvenir shops. And considering a puzzle as a toy was a new idea. Rubik’s Cube was appeared in toy stores in Hungary in the year 1977 and also featured in international toy fairs, like the 1979 Nuremberg Toy Fair — where it was seen by Tom Kremer, a renowned businessman who brought the idea to the United States leading toy company, Ideal Toy Company in. By the early 1980s, the toy was featured in American TV commercials as well as advertising, and that year, Rubik’s Cube became the star of an animated series in  the year 1983 called “Rubik, the Amazing Cube.”

The first Rubik’s Cube World Championship was held in Hungary in the year 1982, wherein 20 competitions, chosen from smaller competitions in their regions, came together to solve the puzzle as fast as possible. Minh Thai from the US was declared as a winner. He solved the puzzle in 22.95 seconds. Afterward, he published a book that taught others how to solve the puzzle fast.

During the next two decades, as the World started to move on to diverse toys as well as inventions, most particularly with the everyday technological developments, which got the attention of the world, Rubik’s Cube began to fade from the public view. However, it still remained on the shelves and still amazingly well. On the other hand, the hype, which came back in its beginning years, had much died off.

Rubik’s Cube did make infrequent appearances in the news, on the other hand, such as the Masterpiece Cube, which was made in the year 1995 by Diamond Cutters Int.  With a price of $1.5 million, it is considered the most luxurious and pricey Rubik’s Cube available in the World. On the other hand, as the Rubik’s Cube became less of an ordinary sight in Christmas wish lists, speedcubing was born and started to thrive.

Rubik’s Cube is one of the most popular toys all over the world. For its appeal to arithmetical skill and logic, the wide popularity of this toy might be rooted in the almost boundless number of possible solutions. “That is one of its most mysterious qualities,” according to Rubik. “The end turns into new beginnings.”