AUTUMN SALE - GET YOUR CUBE NOW!
Price goes up in:
00
00
00
00
HOURS
MIN
SEC
Last Chance!
Added to cart
Cart
do you want to translate the page?
Yes
No

Is the Roux Method Better Than the CFOP Method?

The CFOP (Cross, First 2 layers, Orientation of last the layer, Permutation of the last layer) is a speedcubing method developed by Jessica Fridrich in the early 1980s and has been around for over three decades. It is the most preferred Rubik’s Cube speedsolving method used by many of the best speedsolver in the world. Some of the prominent users of the CFOP are Feliks Zemdegs, Antoine Cantin, and Max Park.

The Roux is a newer speedcubing method developed by Gilles Roux, so it has not been used as long as the CFOP. Although not as widely used as the CFOP, it has gained traction with some prominent speedcubers like Austin Moore, Kaijun Lin, Thom Barlow, and Alexander Lau.

The million-dollar question for any Rubik’s Cube enthusiasts would be: Is the Roux better than CFOP?  To answer this question, one has to look at these methods side by side to see how they perform. Some of the major issues related to which method outperforms the other are: the achievements of users of the methods, how easy it is to learn the method, the number of algorithms associated with each method, and which method can be done more intuitively.

Which Method Is More Widely Used and has Achieved the Fastest Speed-cubing Times?

The CFOP is more widely used than the Roux. Most world records have been attained using the CFOP, so we can conclude that it is the fastest method in terms of numbers. However, there some plausible explanations for the CFOP’s success. Firstly, most speedcubing world-record holders use the CFOP and not the Roux method; hence fewer players compete using the Roux. The Roux method’s low uptake can be attributed to it being a much younger method.  The CFOP is also well researched and better documented, and experienced players can make minor changes to their solving technique to attain better speeds.

The Roux has gained traction and steered some of its users into the sub-15 and sub-10 categories. Some noteworthy speed solvers are using the method are Sean P. Villanueva, who ranks third in the world, is the first user of the Roux method to attain a sub-6 category, achieving a time of 5.98 seconds. Kian Mansour became a world-record holder for the one-handed, ranks tenth jointly with Feliks Zemdegs, who uses the CFOP. Feliks Zemdegs is recognized as the most prominent speed solver in the world.

Which Method is Easier to Learn?

Despite the CFOP generally being easy to learn, the Roux method has some features that allow players to save time after overcoming the hurdle of learning new concepts and skills. The Roux uses fewer moves than the CFOP. 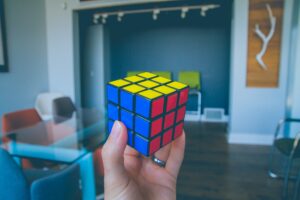 Which Method Relies More on Intuition and Less on Algorithms?

The CFOP has more algorithms that have to be learned, while the Roux is more intuitive and can be executed without learning as many algorithms. For the Roux, only the third step requires algorithms, and the rest can be done by intuition, eliminating the need to memorize as many algorithms.

Which Method has more Potential to Save Time?

The Roux method stands out for its low move count, critical to achieving speedcubing mastery. Optimal move counts for the Roux depend on the experience of the speedsolver. The CFOP has a higher move count, making it less efficient in this regard.  Another plus is that, once the first block is built, rotations are eliminated because of the Roux use of M-slices. However, the block building presents a challenge for beginners.

An added benefit of removing rotations is that players have a better look ahead for the next move.   Although more experienced players using the CFOP have developed ways to minimize the number of rotations, the method still has more rotations than the Roux.

Speedsolving efficiency is also determined by the turning speed, measured as turns per second (TPS). Although the M-slice move eliminates rotations, it has a major drawback. The M-slice reduces the TPS of the Roux compared to the CFOP, which is generally deemed to have faster turns per second.

Overall, the fair answer to the question, which method is better is, it depends. It is debatable which method is better. The CFOP is more of a tried and tested method with a large reserve of research and knowledge behind it. Over time, the Roux method has the potential to gain as many users, which may allow it to grow as an alternative method. As to which method outperforms the other, this can only be seen with time.