Next to the learning speedcubing algorithms, finger ticks are by far one of the most important aspects to achieving faster speedcubing times. Finger tricks are mechanical actions performed by the fingers that help a cuber execute the solutions of any moves in the shortest time possible.  Finger tricks also minimize the transition between each move by performing the rotations more efficiently. More efficient moves can utilize one finger to push the U layer across or combining two actions and carrying them out simultaneously. In some places, finger tricks eliminate the need for a whole-grip and maximize the action of individual fingers. Professional competitors can use just the ring and pinky fingers to perform the D move without needing to rotate the cube.

The only way to develop good finger tricks is through experimenting, observation, and practice. For cubers who want to build or refine their finger tricks, there are countless YouTube videos of professional speedsolving competitions which can be used to observe the various way to carry out finger tricks, and the great thing about these videos is they can be replayed, paused or watched in slow motion. Other ways to discover and learn the various finger tricks are attending local speedcubing tournaments or joining an online community of speedcubers.

Another important factor that significantly influences speedcubing is the type and quality of the Rubik’s Cube. Store-bought ordinary toy Rubik’s Cubes are not able to reach the fast times attained by top speedcubers. Some of these cubes do not turn as smoothly and may require whole-hand turns. It is important to purchase a cube that is geared for speedsolving. 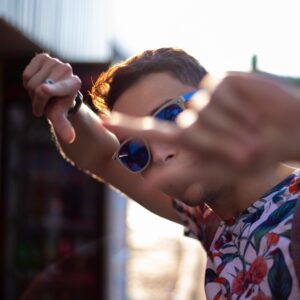 This is a short beginner’s introduction to more efficiently carrying out some of the face rotations on a Rubik’s Cube.

U’ move (90o counterclockwise rotation of the Upper (Top) Face of the cube) – The U’ move is similar to the U move, but in this case, the left index finger is used to rotate the top layer in a counterclockwise direction.

R move (90o clockwise rotation of the Right Face of the cube) – The most common and recommended way to turn the right and left face of a Rubik’s Cube is by using the entire wrist.    To perform the R move, hold the right face with the right hand so that the thumb is on the bottom edge and the first three fingers are on the three top pieces. Then rest of the cube is held using the left hand. The right wrist is rotated to complete, then R or R2 moves.

R’ move (90o counterclockwise rotation of the Right Face of the cube)- hold the cube in a similar way to the R move, but in this case, the thumb should be on the front face and the first three fingers on the back.

B move (90o clockwise rotation of the Back Face of the cube) – The B move is more challenging to execute, and although it is a rare move, the B move may be needed if it is a part of an algorithm the cuber is using. Speedcubers generally rotate the puzzle so that the B face is on top and then turn in the same manner as a U face. T

D move (90o counterclockwise rotation of the Down Face of the cube) – The D move is the most difficult of the cube face rotations and usually takes a longer time to master. The cube is held from the middle and top layers with the thumb and first two fingers, leaving the ring and pinky finger free behind the puzzle. Next, one of the ring fingers is used to rotate the down face layer in the required direction.

It is recommended to practice these moves slowly first to master them and then gradually work on the speed, learning to switch between the positions quickly. Another tip for improving finger tricks is to practice a sequence of moves (algorithms) or a scramble that combines a series of moves (finger tricks) together. These take a while to master, and the best way to do this is to practice the moves frequently. These same finger tricks are also used on larger puzzles such as the four by for (4×4) and the five by five (5×5), but they would have to be adapted for a larger scale.