What Is the Connection between a Rubik's Cube and Group Theory?

Mathematics explains everything from physics to engineering, right down to the mechanisms of how DNA functions. It should not come as a surprise that mathematics can also explain the enigmatic concepts that underlie solving a Rubik’s cube. In recent years, educators, cubing enthusiasts, and professional players have discovered that group theory is linked to solving the Rubik’s cube.

Group theory is a principle of abstract algebra, and its concepts help understand the functioning of Rubik’s cube better. Many mathematicians have used the Rubik’s cube to illustrate permutations and algebraic structures.

In this article, we explain the connection between a Rubik’s cube and group theory

What is group theory?

Group theory is a branch of abstract algebra and deals with how individual elements interact in a group. In the case of the Rubik’s Cube, the elements are the faces of the toy. To be called a group, the elements need to follow certain axioms. Let us take a look at 3 axioms that are related to the Rubik’s cube. 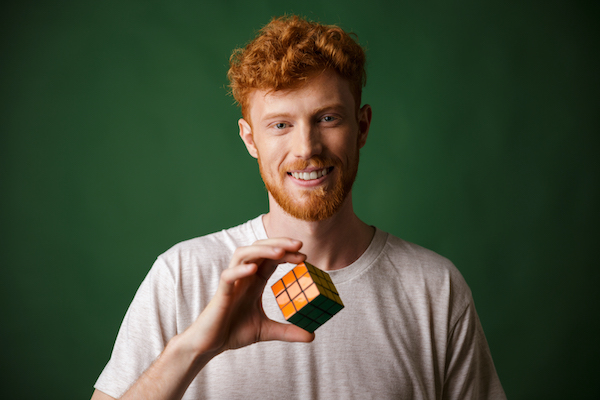 On a Rubik’s Cube, a person can rotate each row and column of the cube’s face, and each position is a permutation. In mathematics, the more elements there are, the more possibilities of permutations there will be. In the case of this little toy, more than 43 quintillions of permutations are possible. This is why trying to solve these puzzles without any idea of what you are doing is not possible. You need algebraic strategy and the ability to identify patterns.

Want to be a Rubik’s cube champion? Learn group theory in detail

It is a well-known fact that the Rubik’s cube is intrinsically tied to the concepts of mathematics. Millions of people across the world play this puzzle in order to hone their problem solving skills, and develop their mathematical reasoning.

If you would like to get better at your cube solving skills, you should probably approach it from a group theory perspective. By analyzing each face of the cube, it is possible to determine the sequences of permutations that can lead you to a solution. This will help you to solve the cube quickly and strategically. If you are considering solving the Rubik’s cube at championships, you might benefit from studying group theory in detail. That’s the secret of many Rubik’s Cube solvers.

If group theory sounds complicated, a smart cube will simplify the algorithms so that anyone can understand them. You don’t have to be a mathematical genius and know everything about axioms, groups, and elements to become a Rubik’s Cube master. The smart cube syncs to your phone and simplifies the step of the algorithm by step for beginners.

GoCube’s smart cube is inspired by the Rubik’s cube, and it connects to your smartphones and tablets. It makes learning how to solve the cube easy while encouraging you to enhance your mathematical reasoning. With some practice, you will be able to understand group theory as well. That knowledge will help you solve the cube as quickly as a pro.