The Rubik’s Cube is a three-dimensional combination puzzle that has remained popular since the 1980s.  Although it looks quite simple, it challenges the minds of millions of people around the world. This inevitably raises an important question: if you can solve a Rubik’s cube, does it make you smarter? The short answer is, yes, it does.

Solving the cube develops your cognitive abilities, enhances your ability to work under pressure, and helps you develop problem-solving skills. It can also help you to deal with situations patiently, a sign of intelligence.

There have been many studies that point towards the benefits of solving Rubik’s Cubes. First and foremost, regularly solving the cube has shown to significantly improve problem-solving skills. Psychological studies show that problems need to be broken down into smaller parts before being solved. Twisting and turning the cube to get the same color on each side of the cube is an example of this tactic. Eventually, you learn to identify patterns and with practice solve the cube more quickly.

The Rubik’s cube requires a lot of concentration to solve. Your brain focuses on the one task of solving the cube which increases your concentration. Keeping your brain active allows you to process information faster. Better concentration will extend to abilities in other areas such as learning other new skills.

Solving Rubik’s Cubes increases finger dexterity. With speed as a priority, it improves your natural reflexes. Agility is one of the many health benefits you receive from solving Rubik’s Cubes. Since twisting and turning the cube requires speed and precision, the more you practice, the better shape your fingers can be in. This prevents joint degeneration as you grow older. The flexibility of fingers, agility, and enhancing natural reflexes all slow down age-related cognitive deterioration.

Speed-cubing is the act of trying to solve a Rubik’s cube in record time, competing with one’s own past records or with other cubers. Speed-cubing has become a popular sports-like event to test problem-solving skills. Many of the world record setters are considerably intelligent and use speed-cubing to improve cognitive skills. For example, record holder Max Park struggled with autism early in his life. Speed-solving Rubik’s cubes allowed him to develop his fine motor skills and social skills. 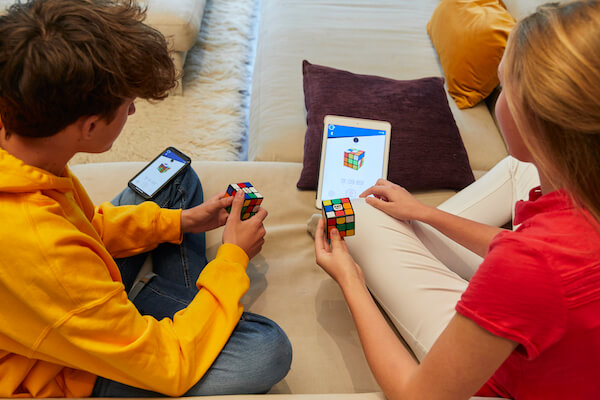 Increase difficulty level to put your brain to work

If you were wondering how you can use the Rubik’s cube to improve your own intelligence, the trick is to increase the difficulty level progressively. 3x3x3 cubes are the most common, but there are more complex variations. There are versions from 2x2x2 to 7x7x7. Some players even use blindfolds to increase the level of difficulty.

Another trick is to compete with friends both online and offline. This not only helps you solve the cube quickly but also improves your spirit of competition and need for improvement.

Rubik’s cubes can make you smarter