The Rubik’s Cube is a popular puzzle that was discovered by Erno Rubik, a Hungarian sculptor, and professor of architecture. Since then, it has become one of the world’s most popular 3D combination puzzles. Modern versions such as our GoCube are app-enabled and can be solved on smartphones, adding value to your screen time. In fact, GoCube is a great gift for both adults and kids, as it is the perfect brain-teaser gadget that makes people smart.

In this article, let us take a look at how GoCube and other variations of the Rubik’s Cube enhance our intelligence.

What is a Rubik’s Cube, and how does it improve our intelligence?

The Rubik’s Cube consists of a cube that is covered by nine cells in six different colors. Players need to move the cells of the cube until each of the six faces of the cube has only one color. Though the puzzle seems simple, it can take a very long time to solve and requires multiple cognitive skills such as attention, hand-eye coordination, determination, problem-solving, observational skills, and patience. In addition to making children and adults smarter, Rubik’s cube can also help enhance one’s ability to tolerate distress and improve one’s emotional intelligence. 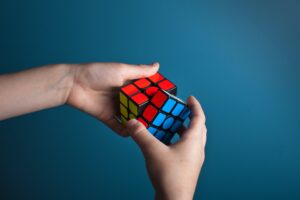 A little bit of psychology and a whole lot of intelligence

Science has repeatedly shown that solving puzzles improves neural plasticity, also known as neuroplasticity. This is often described as our brain’s ability to evolve and improve its abilities after we put it to work. Puzzles such as the Rubik’s Cube are a great way to help our brain form new neural networks.

The G-factor of intelligence, also known as general intelligence is an amalgamation of various kinds of intelligence. This includes problem-solving, numerical, verbal, and other kinds of abilities. Psychologists have hypothesized that intelligence also includes an emotional component, with patience being a crucial factor. In other words, solving the Rubik’s cube is the easiest way to get smarter.

Solving the Rubik’s cube requires attention and goal-directed behavior. Studies show that both adults and children are able to concentrate better after solving a Rubik’s cube. This is particularly important for children with Attention-Deficit and Hyperactivity Disorder (ADHD), who are often unable to pay attention to lessons in the classroom. By improving attention, both children and adults will find themselves more receptive to new information and knowledge. This gradually builds intelligence over time.

Puzzles such as Rubik’s cube require eye-hand coordination for sustained periods. The player needs to coordinate their vision with their hand movement, which is known to enhance neuroplasticity. This helps improve cognitive skills that may directly or indirectly boost intelligence among both adults and children. Children will especially benefit from learning to coordinate their visual reflexes with hand movements, a skill often required to build performance intelligence.

The Rubik’s cube requires the player to move and manipulate their hands constantly in order to make each face of the cube display the same color. Even while trying to solve the puzzle on a mobile phone via an application, adults and children will benefit from improved gross and fine motor skills. Various gestures and finger movements are required to solve the Rubik’s cube on a touchscreen.

Last but not the least, solving the Rubik’s cube requires patience and the ability to tolerate distress and frustration. These qualities directly help the individual to practice patience and remain calm in the face of adversities. Those who are impatient or prone to anger may be encouraged to play the GoCube in order to learn emotion management. Emotional intelligence is an integral part of general intelligence.

GoCube is the perfect solution to enhance intelligence

Psychological studies have repeatedly shown that Rubik’s Cube and other puzzles help both children and adults to improve their cognitive abilities and general intelligence.

You may also choose to buy the puzzle as a gift for someone you care for. Not only will it help to improve intelligence, but it will also improve emotional health!

Get GoCube now and solve Rubik’s Cube right on your smartphone.