What Are Smart Toys?

A smart toy is a digitally-enhanced toy with its own intelligence. It is often able to learn, behave, and change its actions based on external stimulus. In other words, it responds to the actions of a player in different ways depending on how it is programmed. Smart toys are usually powered by cloud computing, artificial intelligence (AI), and sensor-based technologies such as the Internet of Things (IoT) to enhance the capabilities of a traditional toy.

Although smart toys are marketed for both adults and children, it is necessary to understand why they are important for a growing child.

The importance of play and the role of smart toys

Play is an important activity that helps a growing child to achieve developmental milestones in time and acquire necessary skills. It is essential for a child’s cognitive, social, physical, and emotional development. Children learn and understand the world around them through play. Play is varied, and it involves fantasy, interaction with objects and people, and solitary activities.

Any object a child decides to incorporate into its play is known as a toy. While toys can be extremely sophisticated, even a newspaper rolled into a ball can be described as a toy if a child decides to play with it. While all kinds of play (and toys) have their benefits, smart toys are more relevant and useful in today’s world as children are exposed to technology at a very young age.

Here are some unique benefits of smart toys:

Note: Some smart toys may have social networking capabilities. As a result, younger children should be supervised during play so that their privacy is protected.

A smart toy is a generic term for any toy that is enhanced by technology and has a certain degree of intelligence. This intelligence is usually the result of AI, robotics, virtual reality (VR), augmented reality (AR), or IoT. It is important to note that many toys today use some form of digital enhancement, due to which, the line between traditional and smart toys are increasingly blurred.

Note: There are many age-appropriate gadgets that are specifically developed for children for the purpose of play and education. However, these may or may not be “smart”.

GoCube’s Smart Cube is an accessible smart toy for children

The Smart Cube is an intelligent version of the traditional Rubik’s Cube and is a suitable toy for children to develop a variety of skills. It helps children to develop their fine motor movements such as twisting, manipulating the pieces of the cube, and making goal-directed finger movements. In addition, it also helps kids gain problem-solving skills and pattern recognition, in a fun and entertaining manner. 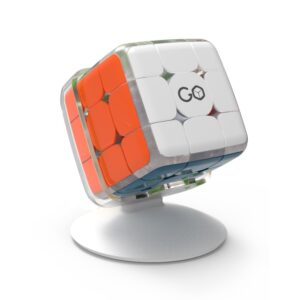 Under the supervision of parents, children can network with other players of the same age through Smart Cube’s mobile application. This helps them boost their competitive spirit, augment social skills, and build empathy. Most importantly, the constant feedback in the form of suggestions, tricks, and player statistics provides reassurance and guidance to children who may be intimidated by complex puzzles such as the traditional Rubik’s Cube.

In short, GoCube’s Smart Cube is an age-appropriate smart toy that can be used by both younger and older children for entertainment and skill development.