What is Speedcubing and How to Become a Speedcuber?

Speedcubing, sometimes referred to as speedsolving, involves solving a variety of Rubik’s cube puzzles as quickly as possible. Players perform a series of moves to unscramble the puzzle and ensure that each side of the cube has the same color.

Although the 3x3x3 cube is the most popular Rubik’s cube among speedcubers, some events are dedicated to the 2x2x2, 4x4x4, 5x5x5, 6x6x6, and 7x7x7 cubes as well. Certain events may also focus on solving these cubes single-handedly, or while being blindfolded.  Speedcubing events test the players’ finger dexterity, and cognitive skills such as problem-solving, strategic thinking, and memory.

Where do speedcubers compete?

Speedcubers train all year round to hone their skills to be as efficient as possible when completing the Rubik’s Cube. Every two years, they come together to compete at the Rubik’s Cube World Championship, hosted by the World Cube Association (WCA). This bi-annual competition is organized to crown the best speedcuber in the world.

In 2018, a new competition called the Red Bull Rubik’s Cube World Cup was introduced in partnership with the energy drink company. This new competition was announced to challenge even the most advanced cubers by introducing innovative events for both individual players and teams.

Who is the fastest cuber in the world?

Solving a Rubik’s cube is already a difficult feat. However, speedcubers master the art of completing these puzzles as quickly and efficiently as possible. The title of the world’s fastest cuber is currently held by Yusheng Du from China. Yusheng began competing in 2015 and continues to inspire other speedcubers.

On the 24th of November, 2018, Yusheng Du competed at the Wuhu Open, where he broke the world record for completing the 3x3x3 Rubik’s cube in the shortest time, at an astonishing 3.47 seconds. By doing so, he beat the previous record held by Feliks Zemdegs by 0.75 seconds. However, it is interesting to note that a computer recently completed this same puzzle in a surprisingly short time of 0.38 seconds. 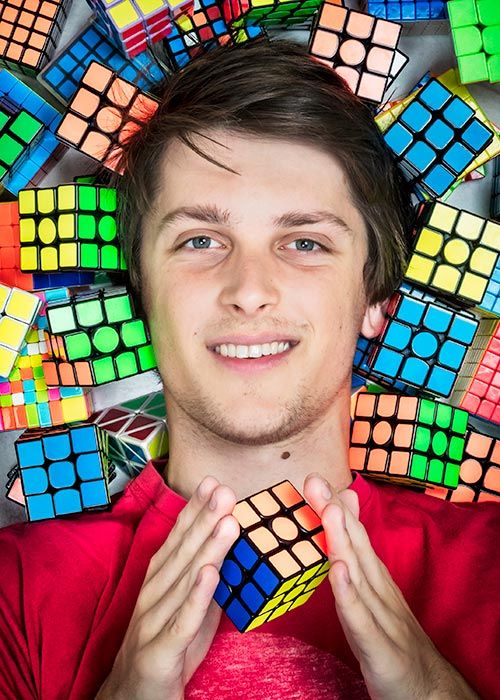 Feliks Zemdegs is one of the most popular speedcubers and he still holds the record for being the fastest one-handed solver at 6.88 seconds. He is so popular that there is even a Netflix documentary about his friendship with Max Park. Max Park is another speedcuber who was diagnosed with moderate to severe autism as a child. Speedcubing helped Max Park to improve his social skills and finger dexterity. The stories of Feliks Zemdegs and Max Park have inspired many to beat the odds, forge friendships, and pursue excellence.

How fast do you have to be a speed solver?

For most people, while learning to complete the iconic puzzle, it can take anywhere between 5 and 10 minutes to successfully finish solving. With practice, this time can be reduced to less than 5 minutes. While practicing, it is important to focus on learning algorithms and patterns applicable to solve the puzzle, rather than concentrating on hand speed.

Once beginners begin to complete the cube in under 2 minutes, they should learn new methods and techniques to further improve their completion time. Without the extra effort, most cubers will find that their times begin to stagnate around this point. Pattern recognition and advanced techniques are key strategies to improving completion times. Constant practice is undoubtedly the most important strategy to get better at speedsolving.

Although some people can complete the cube in around 1 minute, they are not considered speedcubers unless they complete the puzzle between 25 to 30 seconds consistently. On the other hand, certain people feel that under 50 seconds is the threshold.

The key to becoming a speedcuber

With constant practice and learning, anyone can improve their completion time. Add some extra dedication and hard work, one could be on their way to competing at official events. All official events need to be authorized by the WCA, and the presence of a WCA delegate is mandatory. To increase one’s chances of beating records at these official events, one should focus on learning different strategies, practice regularly, and network with other players. Most importantly, one needs to be patient until their skills improve.